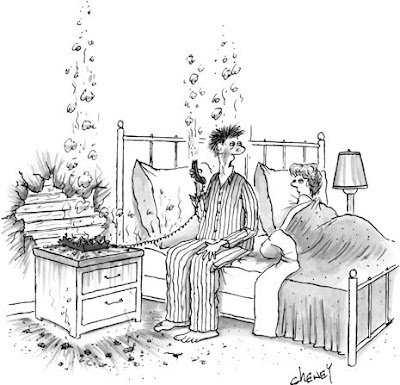 For some reason, this particular post consistently draws the highest number of page views for this blog. So I thought I'd take a moment to explain.

WELCOME to The Anti-Cap Contest (est. 2003).   Each week we invite you to summit your most outrageous captions for New Yorker magazine's weekly Caption Contest. We encourage the tasteless and bizarre entries that would be scoffed at by the stuffy and politically correct New Yorker brain trust.  This blog (est. 2008) is administered by a guy named Al who was born in Brooklyn but now lives in L.A.

Note: You can't go wrong with the old, exploding-phone gag. And is it just me, or does the woman in bed have an inordinately huge ass. (Not that there's any thing wrong with that.) I knew this cartoon would draw Anti-Caps about terrorism, sex, sex with terrorists, women with huge asses, Keith Hernandez and our deep hatred for the phone company. As is so frequently the case I was not disappointed.
As it happens, I once again tossed a log onto the barn fire of banality we call the "real" contest. As I mentioned last week, I "registered" with the New Yorker so I could access the caption archive. (It's been since pointed out to me that this archive has been available for quite some time, but I believe the fact that I didn't know this gives me street cred.)
My cap touched on what's obvious: The person on the other end of the call is so angry they have somehow managed to detonate the phone. The man holding the receiver is explaining why this has happened to a bleary-eyed woman who has an inexplicably huge ass. (Again, that's an observation, not a judgment) So anyway here's the cap I submitted to the "real" contest:
.
"They're so nice until you miss a payment."

It's a comment about companies that extend credit and then get all snotty when you don't pay it back the way they had hoped. It's insightful, topical and marginally funny; but I doubt it will be named among the finalists. I share it here, because I can. Leave a comment expressing reverence, disdain or indifference.

WINNER
Seems like lately the terrorists are just phoning it in.-- JohnnyB (JUDGE'S COMMENT: Like the way you phoned in many of your past caps, hey Johnny B? But this one's

pretty good. Maybe it was inspired by the idiot who loaded an SUV with low tech explosives and touched off a bomb scare in Times Sq. One painful lesson from the Bush years: lazy incompetent people can still be dangerous.)

SECOND PLACE
"Fucking Talibanmarketers."-- Wile E. Chipotle (JUDGE'S COMMENT: Same spirit as the winner. Even though "tali" doesn't really sound like "tele," I like this cap. It's short, feeds into our paranoia and has a dirty word. Good enough for me.)
HONORABLE MENTIONSSee? Phone blows up, dry sheets on my side. You see a spider, and we have to get a new mattress." --Damon (JUDGE'S COMMENT: The point: She spontaneously urinates when she's frightened. He does not. He's lauds it over her--and rightly so.)
.It's the Pharmacy, dear. Did you want an IUD or an IED?-- Jim Cavanaugh (JUDGE'S COMMENT: Two items that are very different and not interchangeable, but in both cases the "d" stands for device. This isn't really funny, just funnier than most of the others. Nice work, Jim.)

"I think they're in the last throes, if you will, of the insurgency."-- Hey, it's a Cheney cartoon(JUDGE'S COMMENT: We will long recall Cheney's ability to deny any reality that he did not personally approve.) 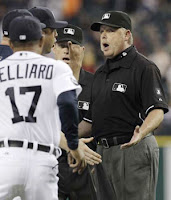 "Joyce! You crazy bastard!"-- Anonymous (JUDGE'S COMMENT: A reference to baseball ump Jim Joyce [pictured right]. As the world now knows, he blew a huge call, quickly admitted it, expressed regret, apologized and cried. It was text book damage control--and yes he will write a book.)
. ."Kaczynski, you crazy bastard! When did you get out?"--dwilk (JUDGE'S COMMENT: Ted, of course, used the mail to kill and maim complete strangers. Crazy? yes. Bastard? No. It was his brother who turned him in.).
“The funny thing is, I still hear a ringing.”--Richard H (JUDGE'S COMMENT: Funny caps almost never include the word "funny." This proves the point.)

"Were are my slippers?"-- Roger McGaugh (JUDGE'S COMMENT: In the event of a nuclear attack, this really is the first thing some people would say [Although they would say "where," not "were." So this is actually very perceptive.)

"Hey woman with the implausibly large elephant ass, please tell me you didn't fuck with my phone."
-- Grandma (JUDGE'S COMMENT: Big ass people get this abuse all the time. )


The thing is, I was just gonna let it ring.-- glam the ham (JUDGE'S COMMENT: Or let it go to voice mail.)
.
“That was the Grim Reaper. I get the feeling he doesn’t care anymore. He's totally just phoning it in.”-- cta (JUDGE'S COMMENT: This one came well after Johnny B's but I suspect cta conjured it up independently. Kind of a white bread version of this week's winning entry. ) ."That was our marriage exploding, Tipper. Let's go back to sleep and call the media in the morning. On a different phone."-- Francis (JUDGE'S COMMENT: Way to keep it topical. I've long wondered, what kind of name is "Tipper.")


"Honey, I'm pretty sure the Witchita Lineman is dead."-- Estupido Yackson (JUDGE'S COMMENT: Recalls a great song. Some times referred to as "the first existential country song.")
I was just sitting there taking a dump when BAM! ithit me like a ... like a ton of bricks.
--Props to Tim H (JUDGE'S COMMENT: This a from an acceptance-speech/comment left by Tim after he won last week's contest. Nice to see 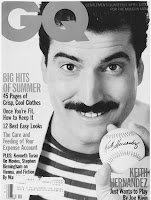 someone is paying attention.)
.
Angry Mets fans continue to torment a sleep-deprived Keith Hernandez.
-- Jim Cavanaugh (JUDGE'S COMMENT: Makes absolutely no sense. Mex is the best first baseman in the history of the Mets. [And yes, I'm aware of Ed Kranepool's work in this area.] If Keith [pictured right] looks and sounds like Freddie Mercury from Queen [if he were still alive, I mean], than so be it.)


"I asked you for the number for the weather . . . not the Weathermen."
-- blw (JUDGE'S COMMENT: Nice applied knowledge. Good use of an ellipse.)


"Honey it was BP; apparently they're our new phone service provider." -- Sarah (JUDGE'S COMMENT: Looks like BP is our new corporate villain until the next one comes along. At least Enron didn't kill any pelicans.)


"That was Brian L. He says he doesn't like the way I judge the anti-caps."--Brian L (JUDGE'S COMMENT: I'm no Salman Rushdie but I know all too well that people can get very angry when you write something they doing like. That's why this has teeth.)


.
"It was the neighbors—they wanted to welcome us to our new home in East Jerusalem."--
G. Had (JUDGE'S COMMENT: Hate to sound like I'm gonna sound, but it's still safer than south central L.A.) .

Wow that blew my Ironman suit clean off. now I'm Stark naked -- Stan Lee (JUDGE'S COMMENT:This is only funny if you're 10 you know that Tony Stark is the wealthy industrialist who is not naked when he wears his Ironman get up.)
.

Despite over a year of safe use, Larry's hydrogen-filled telephone eventually exploded in a cataclysmic display of fire and smoke. Anonymous (JUDGE'S COMMENT: Nice use of big words, but let's not lose perspective. Wouldn't Larry have been vaporized? )
.
"Did you hear me? I said, 'my phone is blowing up.' You know, just like how the kids say it nowadays? Was the timely joke worth irreparable ear damage? Absolutely not." --wizalt (JUDGE'S COMMENT: As if!! It was like maybe a little timely five years ago. And is "irreparable" like "totally?")
.Fatally, you crazy bastard! I'm hurt fatally.-- Rocko (JUDGE'S COMMENT: Slightly clever. You know I have a fondness for the classics.)
.
Honey, you know that guy 'Al in L.A.?' Is his last name 'Qaida?' [acknowledgment @blw] --Stan D. Payne (JUDGE'S COMMENT: No, it's not And "al in la" is all lowercase and what's with the acknowledgement thing?)
.Now that I'm up I wonder if it's too late to enter the anti-cap contest. I never know when that al guy is going to deign to render his judgements.-- Anonymous (JUDGE'S COMMENT: Anything before Sunday at midnight (eastern time) will be considered. Good use of the word "deign," by the way.)
Posted by . at 11:07 PM

al,
On May 10, Keith Hernandez fell asleep in the announcers booth during a Mets-Giants game.

Props to Props to Tim H for keeping his or her pulse on the Zeitgeist. Or something.

Signed,
Tim H
"Winner" of The New Yorker Cartoon Anti-Caption Contest #241 (Actually, it was #242, but don't tell al in la that he screwed up the number, OK?)

...and by JohhnyB I mean, of course, JohnnyB. Accept no substitutes.


Very interesting story. I didn't find it boring to read. In fact, I really had a lot of fun reading your post. Thanks.